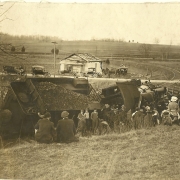 To see a larger version of the photo, click HERE.

1) What is happening in this photo?

2) How many types of transportation do you see in this photo? List them.

3) What are some clues that can help you date when this photo was taken?

4) What was the train hauling?

5) Who is included in this picture? (Look for clues to gender, age, and race.)

6) Who is not included in this picture? (Look for clues to gender, age, and race.)

7) Who do you think took this picture?

8) Why do you think this picture was taken?

9) Where was this picture taken? (Hint, the location is in Johnson City.)

10) What is the most surprising or shocking thing about this photo?