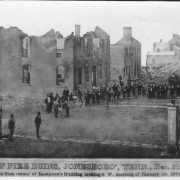 To view a larger version of the image, click HERE.

1) What is the first thing that stands out to you in this photo?

2) What do you think happened here?

3) What evidence do you see that helps explain what happened?

4) When did this event take place?

5) What do you think all those people are doing out in the street?

6) Who is included in the photo? (Look for clues to gender, age, and race.)

7) Who is not included in this picture? (Look for clues to gender, age, and race.)

8) What is a bucket brigade and what does it have to do with this photo?

9) Who do you think took this picture?

10) Why do you think this picture was taken?

11) What is the most surprising or shocking thing about this photo?

Additional Study Question – Can you identify where this photo was taken on Main Street, Jonesborough? Hint, Lampson Hall was located at 107 E Main Street. If you go to that location and face Southwest, what are you looking at? Remember to use safe distancing and caution when outside.

For a more involved lesson on the fire of 1873, you can read all about the “Fire Fiend” in this article from The Herald & Tribune that was printed after the disaster occurred. This makes for a great vocabulary lesson. Click HERE to access the full story.

1) Open ended answer, but one of the most striking elements is the destroyed building in the foreground.

2) A fire. If you cover the information at the bottom of the photo, a common answer is war or bombing.

3) In this case, the information is given at the bottom of the photo. The burned out and destroyed buildings are also a clue. You can see the smoke damage on the buildings.

4) The fire took place during the night of December 31, 1873. The photo was taken on January 1, 1874. In this case, the information is at the bottom of the photo. – This leads to another question, Do you think New Year’s celebrations caused this fire?

5) Open ended answer, but they’re most likely surveying the damage.

6) It’s hard to make out exactly, but it looks like mostly men. There do seem to be a couple of children standing outside the big building. There are also some dogs in this photo. Why do you think it would be mostly men?

7) Again, it’s hard to make out exactly, but there don’t seem to be many women in this photo.

8) A bucket brigade was a method used to combat fire. A group of people, mostly men, would line up and pass buckets full of water from the nearest water source down the line and the last person tossed it on the fire. This was not a very effective way to combat fires, especially large ones. Jonesborough employed this method until 1888 when the town purchased firefighting equipment. Maybe the men in this photo had been part of the bucket brigade from the night before?

9) In this case, we know who took the photo. L.W. Keen, the unofficial town photographer, captured this image. A common answer would be someone from the newspaper.

10) To capture the devastation of the fire. We know that Keen actually made several copies of this photo and sold it as souvenirs.

11) Open ended answer, but the amount of devastation is striking.

Additional Study Question – If you go and stand at 107 East Main Street and face Southwest, you’d be looking at Mauk’s at 101 West Main Street. The burned out building in the forefront of the photo is where Mauk’s stands today.