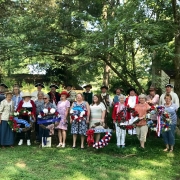 On Sunday, September 11th, the State of Franklin Chapter of the National Society of the Daughters of the American Revolution (NSDAR), are hosting their Ninth Annual Bell Ringing in honor of Constitution Week. The event will take place at 1:30 p.m. at Oak Hill School, located at 214 East Sabin Drive in Jonesborough across from the Jonesborough Public Library. The program will focus on the history of the Fourth Amendment to the Constitution that reads, “The right of the people to be secure in their persons, houses, papers, and effects, against unreasonable searches and seizures, shall not be violated, and no Warrants shall issue, but upon probable cause, supported by Oath or affirmation, and particularly describing the place to be searched, and the persons or things to be seized.”

The program will include music, speeches, and observance of the 21st anniversary of the September 11, 2001, national tragedy. Several heritage groups will be participating, including the Kings Mountain NSSAR, the Overmountain Victory Trail Association, and participation from other local chapters of the NSDAR.

Please bring your own chair and a bell to ring! Seating will not be provided on site. The Daughters of the American Revolution began the tradition of celebrating the Constitution. In 1955, the DAR petitioned Congress to set aside September 17-23 annually to be dedicated for the observance of Constitution Week.  The resolution was adopted by Congress and signed into law on August 2, 1956, by President Dwight D. Eisenhower.  The State of Franklin Chapter of the NSDAR has been based in Jonesborough since 1929. 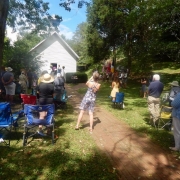